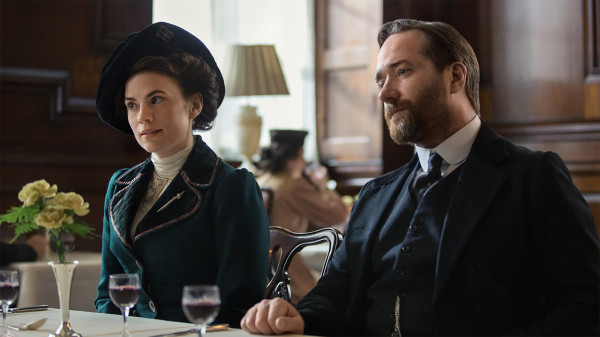 In Howards End, the lives of three very different Edwardian families become entangled: the Schlegel siblings are intellectual young adults, the Wilcox family rich capitalists and Leonard and Jacky Bast belong to the lower-class working poor. Margaret Schlegel, the eldest sibling, befriends an ailing Ruth Wilcox. When Ruth dies, she leaves Margaret the family home of Howards End through a note scribbled on a piece of paper. Her widower Henry, decides not to honour this wish, but later becomes romatically involved with none other than Margaret. Meanwhile, idealistic younger sister Helen Schlegel keeps trying to help the Basts, but unintentionally makes things worse.
I might have read Howards End once, in my late teens, but it's too bad, I just cannot remember... I know I read something by Forster, when I was just starting to read classic English literature and it went wáy over my head, haha! Anyway, I didn't remember the story, so watching this recent four-part BBC adaptation was a real discovery for me.

First things first: doesn't it all look lovely! Ofcourse this is something we've come to expect from BBC period dramas, but still, it should be said and praised! The costumes, the settings, it's a real feast for the eyes. What is also fun is how much the differences in costumes and interiors reinforce the difference between the Schlegels and the Wilcox family. By the way: I just loved the colourful, cluttery but cosy home of the Schlegel siblings, I definitely felt for them when they had to leave that place.

The BBC choose a mix of established and new-to-the-scene actors for this adaptation. I absolutely adored Hayley Atwell in her role as Margaret, she was so strong, a great portrayal of the 'heart' of this story. Though I liked her chemistry with Matthew Macfadyen, I'm not entirely sure about his role as Henry Wilcox. For one thing, wasn't he a little bit too young for the role? He really didn't look old enough to be the father of Charles and Evie, even with his rather fetching beard ;-) Secondly, somehow it is really hard to dislike Macfadyen's Henry, even when he is at his most self righteous and paternalizing. And I think we are meant to dislike Henry or at least be very wary of him. But Matthew Macfadyen just has such a kind face, so I don't know how suitable he really was for this character. I had never seen Philippa Coulthard (playing Helen Schlegel) before, though she does have quite a number of credits to her name already. I really liked her energetic portrayal of Helen very much and she looks very much at home in Edwardian dresses!

Howards End really is not a cosy period drama, not something like Downton Abbey, to curl up on the sofa with. It's too full of drama and human conflicts for that, too much is happening in all the relationships that you really should be on the edge of your seat for. This is very nicely punctuated in this adaptation by all the unfinished sentences and people rushing after each other, trying to explain. It left me at least with a lot of food for thought and a wish to understand what it was exactly that Forster was trying to say with this story. The ending I found to be very rushed though. It all went from total chaos to bliss-in-the-summer-sunshine in less than 5 minutes and for me, this detracted from the story. (Maybe this is a Forster thing though, A Room With A View also ends very suddenly).

All in all, Howards End was a very interesting offering from the BBC. A chance to enjoy their excellence in producing historical drama and some great acting. I might even venture forth and pick up the novel (again?), now that I'm old enough to 'get' it!

Did any of you watch this new Howards End miniseries? Maybe some of you know the novel and can tell me whether it was a good adaptation!
Tags: television
Subscribe